One of today’s leading exponents of the baroque violin – Bojan Čičić – will be one of the stars of the show on 25 August with Grand Baroque. Let’s find out more about the leader of the Oxford Bach Soloists…

Bojan is currently leading the Academy of Ancient Music but he has also been in demand as a guest leader and soloists with many of the big names across Europe including appearances with the Orchestra of the Eighteenth Century, the Orchestra of the Age of Enlightenment, the King’s Consort and the Budapest Festival Orchestra.

Bojan has worked closely with conductors such as Frans Brüggen, Trevor Pinnock and Richard Egarr. Bojan has also featured as a leader on numerous recordings with Florilegium, La Nuova Musica, and the Arcangelo Consort. His recording of J.S. Bach’s Concerto for two violins with Rachel Podger was recently named the best available recording by BBC Music Magazine.

Bojan’s own group, The Illyria Consort, recently made their first disc with Delphian Records with a groundbreaking recording of Carbonelli’s virtuosic violin sonatas. The Illyria Consort explores rare repertoire of the 17th and 18th centuries from the Venetian Republic and Habsburg Empire, and have performed at the Utrecht Early Music Festival, the Korkyra Baroque Festival, Festival Laus Polyphoniae, and at the Festival de Sablé.

Future projects include directing Vivaldi’s Four Seasons with the European Union Baroque Orchestra and performing Mendelssohn’s Violin Concerto with the Instruments of Time and Truth.

He is also an expert teacher with a role as Professor of Baroque Violin at the Royal College of Music where he is passionate about training the next generation of instrumentalists in historically-informed playing styles.

Oxford Bach Soloists on 25 August will be directed by Tom Hammond-Davies and led by Bojan Čičić. Grand Baroque will feature some of the finest masterpieces from the Baroque period including some of the coronation anthems Handel wrote for King George II and his magnificent Dettingen Te Deum first performed in 1743 in the Chapel Royal of  St James’s Palace, London in the presence of King George II in celebration of the glorious defeat of the French at Dettingen. 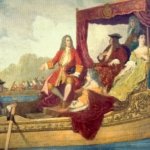 Handel in England
Scroll to top