Praised for their ‘energy, verve and refreshing approach’, the Gildas Quartet, have performed to critical acclaim at major venues including the Bridgewater Hall, Purcell Room, Wigmore Hall and live on BBC Radio 3.

Their bold and explorative approach to performance was recognised by the International Franz Schubert and Modern Music Competition, Graz, where they won first prize in the Audience Engagement Award 2018.

Originally from London, Ontario, Christopher Jones graduated from McGill University with a first class degree in 2009. Completing his masters at the RNCM with Pavel Fischer, he graduated with distinction.

Violinist and chamber musician, Gemma Sharples performs around the UK and internationally. In 2018 Gemma was awarded an ARCM and since 2019 has been a member of London Mozart Players. For 10 years Gemma was violinist with the Albany Piano trio specialising in the performance and promotion of music by female composers.

London born Francesca recently graduated from the Advanced Instrumental Studies masters course at the Guildhall School of Music and Drama after being award first class honours on the GSMD undergraduate programme.  Francesca’s main passion is for chamber music and has performed in major venues and at international chamber music festivals across the UK, Europe and America.

ANNA MENZIES
Cello
Anna has performed across the UK and Europe as soloist, recitalist and chamber musician including concerto appearances with the Sheffield Philharmonic, Tyneside Chamber and Alderley Edge Orchestras. She has been recipient of numerous awards, including scholarships from the Arts and Humanities Research Council and the RNCM’s Richard Newitt Award.

PLEASE NOTE:This event will be run in compliance with government guidelines. This will be a socially distanced event for both performers and audience. Audience capacity is therefore limited and tickets are only available in advance online.

This concert is supported by: 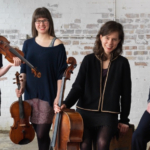 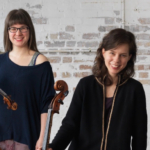